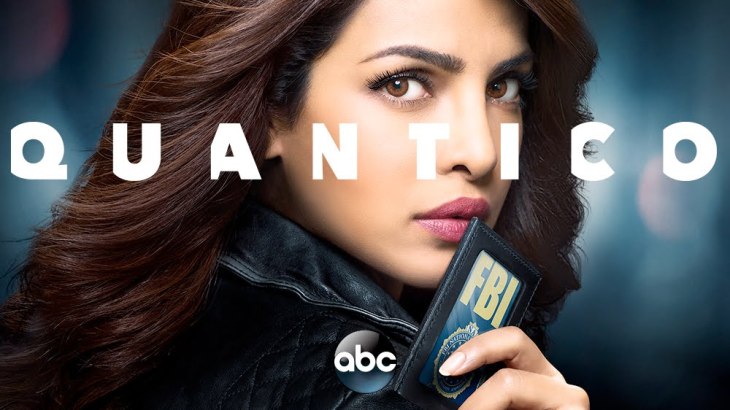 Ok, actually, I’m in love with Priyanka Chopra. Can you say “Gorgeous”?!

If you haven’t heard, Quantico is a new show on ABC which premiered Sunday, September 27th. After reading several reviews online, one critic perfectly wrote that the show is very much like, “when Grey’s Anatomy meets Homeland”. Ha, my thoughts exactly.

To be specific, Quantico is about several new recruits to the FBI Academy who are looking for their chance to become field agents for the FBI. Chopra, known as Alex Parrish, is one of the FBI’s top recruits who also becomes the prime suspect in a terrorist attack happening 9 months later. The shows moves in between flashbacks to the past (when the recruits first start the academy) to Alex’s present (when Alex is considered a terrorist suspect) to unveil how the terrorist attack happened and who might be involved. The FBI thinks the terrorist is Alex, but she leads the audience to believe it’s someone else, primarily one of her fellow recruits.

It’s an interesting roller coaster ride as we learn new things about the recruited agents and the many secrets they’re hiding. It’s hard to tell who to trust, or even who to like. At this point, I’m rooting for Alex Parrish, who seems to be one of the good guys. She has her secrets, but my gut tells me she is one of the most honest people on the show. Granted, we learn the most about her over everyone else.

Aside from Alex, all of the other characters are a mystery. We know nothing about them, but with each episode (and there’s only been two so far) we are dropped hints about their lives and possible hidden truths. At this point, I have NO CLUE who the terrorist is, but I’m going to gamble and say that I think it is Simon. He is sooo creepy, yet so interesting. I wonder what his angle is? They say the killer is always the one you least expect, but he is too smart and seems to have something up his sleeve.

If the killer isn’t Simon, then it is definitely Ryan, Alex’s love interest. I don’t think he is all that he is cracked up to be and in these types of shows, the closest to you is the one who is quickest to betray you. I’m just not buying it that he’s a good guy, especially since the writers are leading us to believe that he is.

Also, what is up with the head trainer? There’s something I don’t like about him either, but I can’t put my finger on it. He’s got waaay to much pull over Ryan and is also hiding something deep. My theory is that he is involved in the terrorist attack but is working with one of the recruits who ends up pulling the trigger on the bomb.

Well, as you can see, the show has me hooked, and I’ll be posted up on my couch watching every Sunday night (at 10pm exactly). I absolutely love a good mystery and…the fact that Ms. Chopra is the shining star. She alone is intoxicating. Beauty, brains, and brute strength…definitely the full package and my kind of woman.

Introverted lover of all things nerd. View all posts by Neen