For over the last few months, I have been discussing the craziness, the changes, and debates happening in pop culture with many of my friends and nerds alike. So grab a rice ball real quick and lets discuss. There has been a long lasting issue regarding people of color (POC), and their representation within comics, movies, books, and anime. There is an unsaid ideology, that if what is being illustrated is not a POC centered tale then they should not be envisioned in the role. Even though the genre being discussed is fiction. POC tend to not be depicted within the larger realm of these areas. This was best shown when Amandla Stenberg was casts in the Hunger Games as Rue. The uproar from Hunger Games fans around the world was enormous. Rue is not black. This was the anger poured in from fans. Twitter was unmerciful. Why is this a issue though? What is American pop culture really saying?

In recent months, Marvel has taken strides to shape the way POC and female characters are being viewed within their franchise. DC Universe has taken those same strides, but in a different sense. As times progress so do the faces of these companies. These franchises, marvel more so than DC, have always tried to create some type of realism to their world to reflect our reality. Marvel has always been a front runner in the idea of superheros in our world. While, DC has taken itself away from our reality, while still being present in issues revolving American culture.

A once white dominated arena of heroism is now beginning to show some new faces, darker faces. DC Universe has never been one to reflect our own world/reality. DC likes to make stories from different dimensions which sets it apart from other comic book streams. They can create any story they want without back story to origin. The origin story begins within that dimension. Using this strength, DC has create a the DC Multiverse more specific Earth 23.  An alternative dimensions where all the superheros are black. All of them!!  As much as I like the Multiverse and Earth 23, I just need to take a moment…. because I cant. DC Universe continues to aggravate me when it comes to the idea of inclusion and diversity among its hero’s. In the main dimension (The DC Universe), all hero’s of color are side characters or tend to have the same ability. (I.e. Black Lightning, Thunder, and Static Shock all black characters centered around lightning abilities) Even though I love all three characters. Creativity tends to lack when it comes to POC in DC.

Marvel continues to play with the idea to reflect reality, and the feel of its audience while staying true to its core of what marvel is. Marvel  universe continues to make great strides in its commitment to diversity by changing the faces of our most beloved heroes. What better way to do this than to transform the the most symbolic character that this nation has to offer, Captain America. This is old news for many, but it still is very interesting. Captain American is now Black. I had this conversation with many of my friends and at comic-con last year.The Captain American mantle will be taken on by his close friend, The Falcon.  In the comic book series,  Steve Rodgers faces a  foe who drains him of his superpowers, rendering him an old and frail man. He then pass his stars-and-stripes shield to Sam Wilson, an ally who goes by the superhero name of the Falcon. Many know this character from in recent films such as: The Winter Soldier and The Avengers 2.

This is crazy!!!!  Captain America (Steve Rodgers) was the face of a American champion. He was everything America is suppose to be. White, blue eyed, blond hair, patriotic, strong, and pure dawned with a shield to protect. This depiction shows exactly what America wants to tell its children that the country is but also to the greater world in itself. So what message is being sent now that that face is black? Yes, a black face is the face of America. This is a message that scares and excite many people within this country. With this image, that is the statement being made. Yes, it was a bold statement to make. Not only Captain America, but a hand full of superheros are now changed to better fit the ideas of diversity and inclusive America. The America of 2015. Many other big name heroes include: Spider-man, (who is now mixed, Spanish and black) and Thor, (Caucasian female, challenging the ideals of masculinity).  Marvel continues to be the front runner when it comes to reflecting our reality, to make their fiction believable. But, this does not come without debate or push back. Many fans, critics, and nerds alike are against the idea of changing so many pivotal characters. They do have reasonable grounds to dispute the topic as well. Many of these characters, fans have grown up with for decades. Comics are so ingrained in American pop culture that new generations of kids, and fans can see their parents favorite superhero growing up, but as a real person. So to change so many characters, so quickly, needed to be explained. Which marvel has done well. Each change has its own back story, a believable back story, that can be widely accepted by fans even if they do not like the change. Marvel still has a long way to go but the attempts being made are worth mentioning. 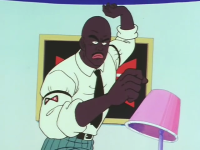 The lack of POC stems into the anime world as well. Many of the characters are of Japanese or Asian decent, but are drawn as white or Europeans, with fairer skin. This ideology behind that is crazy! White is beautifully accepted. SMH. This is not a new idea. Many of our TV shows cartoons and older run with this ideology. But, what interested me more is the fact that I have been seeing POC with darker skin, popping up in many different main stream animes. Whether new characters are being introduced in already established anime, or new animes are being created to have a POC as the main character, a change is being made. Representation is being shown in animes such as One Piece, Naruto, Bleach, Machiko & Hatchin, etc.. even Dragon Ball Z made that move to show better representation as the anime evolved. POC went from being drawn as to how American society envisioned us (the picture above),  to actual character embodiment (the picture below). Drawing different ethnic characters similar to how the main characters are drawn in the show, this is a gain. lol.

Within anime there are still many stereotypes that tend to be reflected inside the illustrations. Physical attributes and personality characteristics like rapping black characters, (Bee from Naruto) or Chinese characters with only lines for eyes. (Brock from Pokemon) This is another aspect that needs to be changed. However, as the future continues to move forward, anime continues to progress.

This progression shows the correct representation that is necessary. I for one am loving it, being the blerd I am. It is nice to see different faucets of entertainment and pop culture reflecting myself and the world we live in. Breaking down stereotypical attributed that are not accurate but drawing/ depicting all bodies of people, equally within their context, as characters in their respect genres of fiction. I’m just say, its nice when a little boy or girl of color, can watch a anime, or movie; or read a book, or comic and say, “Hey! My favorite super hero looks like me.” That is a privilege many of us never grew up with. And, if there was a possibility the options were limited. I think its a dope progression.

But what do you think?