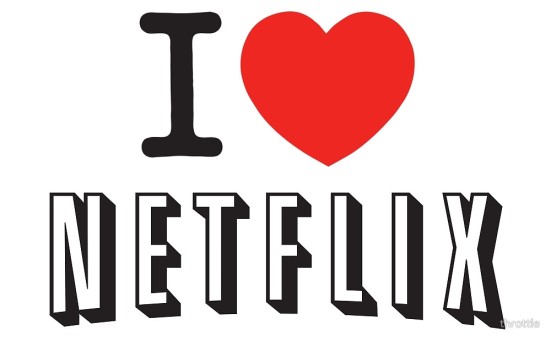 Wow. It’s been awhile, hasn’t it? So much has happened, from movies to TV shows, that there’s just waaaay to much to talk about. My nerdy recap is coming soon, and I can’t wait to share it with you!

In the meantime, let’s talk about our good, old friend, Netflix. 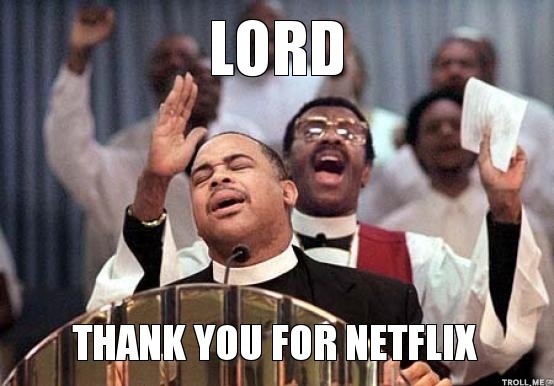 Ooooh, Netflix. How I love thee. In Netflix, I do trust! To this day, it hasn’t failed me yet, and I am sooo thankful (Hallelu-jah) for your many, many blessings. Can I get an Amen? *praise break*

Seriously, though. For the last couple of months, Netflix has been holding me down. The Netflix Team over in California thinks they’re slick. They have completely ruined my trusted relationship with television and gives zero fcks about it. It’s sad to say, but regular TV turns me off. I can’t get jiggy with it anymore, and it’s not because the shows are bad. Many shows, actually a lot of shows, have stepped up their storytelling to provide a decent hour of amazing TV. Buuut…I just can’t. I knew things were really bad when, to this day, I haven’t even watched a Game of Thrones episode. (update: I’m actually up-to-date with GOT. It had to be done, especially with the big “awakening” happening! Your nerdy recap coming soon!) If I’m not watching a 32-hour movie, I’m just seriously wasting my time. Every story needs a beginning and an end. Watching TV Shows week to week feels like a long and overly inconvenient layover. Just completely pointless until you get to your anticipated destination. When I watch a new TV show on the site, I know I’m in for the entire ride, and Netflix knows it too since it promptly queues up the next episode from the exact point of where I left off. You’re telling me I don’t have to get up off my couch to change a disc or pick up my remote to select the next episode? Yes, please! Netflix has become the epitome of convenient. I can watch my 32-hour show on my commute to work (using BingeOn by Tmobile of course! Say what you want about Tmobile, but they know what the customer wants!), on my lunch break, or even on my porcelain throne. I also don’t have to deal with the horror movies my boyfriend so often likes to watch because Netflix has devised a way for me to make them disappear, using my own profile under the same account! Goodbye to Silent Hill covers and random gory girls popping up in my Netflix feed. Now, that was a real blessing!

I know I probably sound like a walking Netflix ad, but I just can’t get enough. This amazing and completely innovative site has brought my TV viewing to a new high, and if a show is not on Netflix, I get like Donald Trump — Boring!

So, I implore you to follow my lead and provide your monthly offering of $7.99 (the Netflix alumni rate) or $9.99 (the freshman fee) to the continued support of this spectacular product!

Now, please tell me that you watched Daredevil Season 2! Although it premiered in March, we’re still on this crazy roller coaster ride of a high this show has delivered. It was insanely good from the writing to the acting, and the amazing fight scenes — there was absolutely nothing bad about Season 2. It left me wanting more and feeling extremely sad that it was over.

There’s news that Netflix has decided to make a Punisher show along with Luke Cage and Iron Fist shows coming out. Kudos to the powers-that-be for making that wonderful decision.

John Bernthal did an amazing job. He was so believable, even though I did view him as Shane from The Walking Dead in the first few scenes of him  being on screen. The serious, gun-loving look was Shane all day. Eventually, as the show progressed,  I didn’t see him as Shane and started to view him as the punishing, maniac fighter he was meant to be. The fight scene in the prison hallway was the turning point for me. O.M.Gee! Although extremely gory, it was sooo badass! More badass than Shane could ever be. He just couldn’t be Shane after that.

The portrayal of Elektra was also enjoyable. She made me want to get off my couch and devote my life to the ninja way.

Did you see how she put some whoop-ass on Daredevil like it was nothing!!! My girl was gooood! She was also super smart and two-steps ahead of everyone. Although she probably attained this skill from Stick, she reminded me of Catwoman with how sly she was and how easy it was to force people to bend to her will. Daredevil was completely love-struck, even when he didn’t want to be. Ha! I love women. We’re so powerful. I do hope that they bring her back in the same playful, charming, blood-thirsty manner. If she comes back as someone else, I’m not sure if I’ll be able to take it.

I love how Marvel has decided to put its dark side on Netflix. It knows it can’t get away with it in Hollywood or the popular networks owned by Disney, so Netflix is just the right medium to show the blood, broken bones, and massive in-the-head gun shot wounds that the fans live for! Again, the Marvel Team tops DC and they’re doing it so gosh darn well! Somehow the right people are making the right decisions! It makes me wonder whether the Marvel Team are actually 10 year-old comic book nerds who have grown up to take over the management scene. They’re in the decision box just making their dreams (and mine) come true! Whether that is the case or not, I’m happy, and I’m glad Netflix has a piece of the pie.

Another genre Netflix has been doing better at is their programming of anime. Now, anime isn’t as big as it should be in the states. I mean you have a lot of dedicated American fans who love the art and the depth from the story lines to the artistic flavor. I mean, a lot of movies now-a-days replicate anime style. Just look at The Matrix…that’s all live-action anime right there. I like that Netflix has dedicated its resources to invest in original anime for us to enjoy. 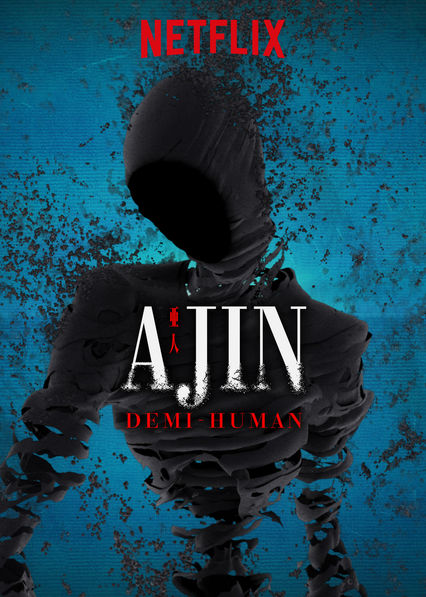 AJIN: Demi-Human was phenomenal. There may be some cracks in the storyline, but for the most part, it was such a good season and I can’t wait for season 2. If you’re new to this anime, watch this trailer:

Basically, the premise is that immortal humans, called Ajins, walk among us and they are undetectable until they are put in a situation where they should die, but don’t. The government is after them, including a teenage boy who recently found out he too was an Ajin. The action in the show is amazing and the storyline is a mystery. There are so many twists and turns that you don’t really know what’s happening until it happens. I enjoyed how “deep” this anime is. It makes you think about human nature and how we’re just so frick’in crazy sometimes, especially when it comes to money or knowledge. We’ll pretty much do anything to get both. If you’re up for a new anime, binge this 13-hour movie on Netflix and you’ll be quite fulfilled. I know I was.

Netflix continues to add amazing TV shows and movies everyday. Currently, I’m on an older anime, Fullmetal Alchemist Brotherhood, even though I’m supposed to be catching up on my favorite TV shows like The Flash and Orphan Black (What season are they on now, btw?). It’s really, really bad. Netflix has taken over my entertainment life, and I just let them! I haven’t completely said goodbye to the major networks, but it damn sure feels like “Ta-Ta for now!” Thank you, Netflix, for the quality, commercial-free, back-to-back episodes and for ensuring that I always have a place in your cyber-filled server of a heart.

Your biggest fan and 24-hour supporter,

Don’t forget, guys, to come back for my recap! Thanks for reading!

2 thoughts on “In Netflix, We Trust. Let’s Bow Down to Daredevil Season 2 and Sing Praise for AJIN: Demi-Human”