It has almost nearly been a week since the season finale of the newly fan crazed show everyone is talking about American Gods. Now people like myself who had no idea what this show was going to be about I looked at the trailer and I said to myself maybe this  is gonna be a horror show, and maybe I won’t get into it that much or maybe this will be another Sci Fi show and as you all know if you don’t know I love Sci Fi. Before the April 30th premiere date, the opening credits of the show was leaked, and many people got there first taste of kind of the tone of the show. In my opinion the open credits can sometimes make or break the way you might feel about show unless you truly are a trooper and say I’m still going to watch this regardless of how this looks. On the flip side the opening credits of this show are amazing and spooky and eerie almost, but give you that kind of futuristic vibe. Every time I see the credits it reminds me of a movie I can never remember the name of until later on in the day. I cannot lie one of the reasons I was on broad wit this show from the jump because of Ricky Wittle, I have become a fan of him after being a fan of the show The 100 and he has done an amazing job in that show, and I couldn’t wait to see what he would do in this.

Now after seeing this trailer I got a little more hyped because of the actors in this show, but I think I was still skeptical of how this would turn out. But I was also watching so many shows on sundays between Veep, Silicon Valley, Into The Badlands, Bobs burgers, but I was on twitter the night the first episode premiered and everyone was going crazy, it definitely made me want to see what all t he hype was about, I was going to check the show out regardless, but seeing how everyone was stunned but what was going on. And I rarely ever really go about everyone’s opinions because everyone could hate it, but then I’ll love it and vice versa, but this I loved it and enjoyed it.

A little back story for those still new to the show, the main Character is Shadow Moon played by Ricky Wittle, we start off by seeing Shadow in jail that we soon  learn was over a stupid crime that could’ve been prevented. Shadow is literally days to maybe a week away from being released from prison until he finds out horrible news that is wife Laura has died in a car accident. He is then released and able to go home and be a free man, but he is having a hard time getting back home to the funeral, until he meets an unexpected con man bumping each of them up to first class plane tickets who we soon learn to find out is Mr. Wednesday. Now while all this is going on Shadow has been having strange visions even in prison of nooses and skulls, and a huge Buffalo with glowing read eyes. I loved the details and the graphics in each of the visions and dreams throughout this show they truly did a great job on that part. Shadow soon learns the horrible truth behind his wife’s death and decides he has completely lost everything. 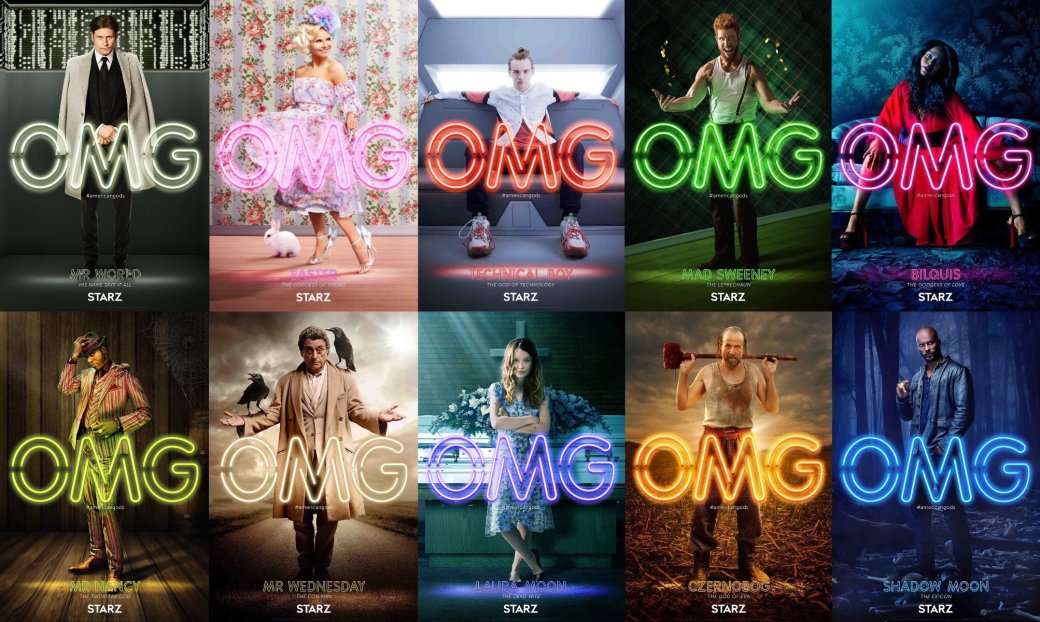 Before I move on, I have to say this cast is absolutely amazing, Ian McShane  as Mr. Wednesday, Orlando Jones as Mr. Nancy, Pablo Schreiber as Mad Sweeney, Yetide Badaki as Bilquis Gillian Anderson as Media. Like this cast is great and many more people who I’ve seen throughout the years in TV and movies. I just love the different colors and scenery in this show, and I love how in the first episode we get a glimpse of Bilquis a beautiful black woman as one of the leads, her scenes just kind of made your jaw drop like it was sexy, but then more so sexy in a kind of something weird is about to happen. Mad Sweeney and Media are probably two of my favorites in this show, and of course Mr. Nancy, he gave us an amazing monologue in only episode 2. Nancy speaking to the slaves on the ship talking about they need to get there power back was so empowering for African Americans, and something that is rarely shown on television. As Black people we rarely see a lot of positive images or words coming from images of Slavery, but how American Gods put Mr.Nancy right in the heart of this slave boat it truly gave you that feeling of this is bigger than television. 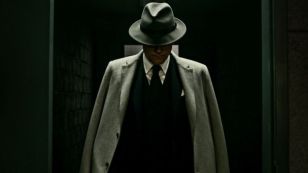 Ok so this show gets pretty confusing, but from what I can decipher we learn that there is a war between Gods going on, the old Gods vs. the new Gods. The Old Gods are not like say Jesus, but more so your Thunder Gods, and God of Darkness, while the new Gods are the World and Media and also Technical Boy. The Old Gods or Mr. Wednesday is recruiting a team of gods to fight against the new Gods because there is no longer faith or belief in the old ways. We soon learn that each team wants Shadow by there side, but there is still a foggy kind of gaze over why everyone wants Shadow, but Wednesday kind of says it a few times why Shadow is perfect. it’s because shadow has lost everything so he has no reason to believe in anything so if you can make him believe in something again then it has a lot of power. So hopefully in Season 2 we get more of a clear Image of why even the new Gods want Shadow, and which side he prefers. We see that Shadow is Wednesday’s road dog, but maybe if he finds out the truth things will begin to shift.

One thing I think a lot of people could agree with me on is what is the deal with this white buffalo? Almost every other episode in this season we get a glimpse of the White Buffalo either in Shadow’s dreams or someone brings it up.  I also hope we learn more about the Gods and how a lot of them originated and why this war is so important, if the belief of the old Gods is non existent does that mean many of them will die? Or will they lose there powers?

So I have to mention this, probably one of my favorite episodes of the season was probably episode 2 with Mr. Nancy, but definitely episode 5 “Lemon Scented you” just the beginning of the episode with the animation was just superb and beautiful. Whoever did the animation for this show in general kudos to them it was just amazing and drew you in. Also the story that went along in the beginning was just so sad, and heart wrenching and you truly felt like you weren’t even watching American Gods, but a Pixar film or like something Tim Burton might have cooked up. Later in this episode we also see Gillian Anderson do her rendition of David Bowie and Marilyn Monroe. This episode had so much action from the jail scenes with Wednesday and Shadow and to also meeting Mr. World with his creepy, and rious but also incredible performance. This episode also kind of explains how the new Gods feel towards Shadow and this so called war.

All season I think fans felt exactly like Shadow in the gifs above, and Neil Gailman the author of the book American Gods, and STARZ was just looking at everyone like how Mr. Wednesday looked at shadow in the last gif. This whole season we have been on a rocky, adventurous, cryptic, weird, action packed ride, and season 2 can only get more interesting. For all those who don’t know American Gods was renewed for a second season right after episode 2 which shocked a lot of people. Not because of the content of the show, but how fast it got renewed. it usually takes shows a whole season or the second to last episode to say it got renewed or even months later. I was thoroughly entertained all season long, and can’t wait to figure out more about the Gods, and hopefully we get to see more of them and the different powers they have. I also hope Shadow kinds of gets out of this state of fear, but I think is reactions to a lot of things are maybe how anyone would feel in that situation.

Even though this show maybe confusing at times I believe there is one underlining message we hear a few times in the show, but it is whatever you believe it becomes real. That saying is very true whatever we put our faith or belief in it becomes almost the thing we believe in and believe it can help us achieve anything. The new Gods are basically a mere image of how the new generation has transformed from believing in the old ways of doing things and coming up with more idols sort to speak.  Also another message from Mr. Nancy “Anger Gets Shit Done”. I have one small theory I think shadow is going to find out the truth of why he is important to Wednesday and I think him and Mad Sweeney are in some weird going to become friends, or once he finds out the truth the Buffalo will appear. I also hope we get more of an understanding why Shadow always sees Nooses, after seeing him visibly getting lynched there has to be some underlining meaning.