Wow! Just wow! (plays back the trailer before writing this) The long awaited “Avengers: Infinity War” trailer is finally!!! finally!!! finally!! — didn’t I already say finally? — but FINALLY here!!! I mean, I don’t know if there’s ever been such a big anticipation for a comic book movie trailer like this one. Have you seen the trailer!? It is amazing. Fans have been waiting for this trailer since almost May or June. Then we heard that people at San Diego Comic Con got a glimpse of this trailer. Fans around the world heard this news and waited for one of the most anticipated movie trailers to drop, but were soon disappointed to find out Marvel was not releasing the trailer until later in the year. That sparked up many angry tweets, and then an unexpected leak of the trailer from comic-con. This only made Marvel mad, but it goes to show that fans want what the fans want.  Word was going around the internet that the Infinity War trailer was coming out, but many people thought it was just a joke until it kept popping up. Then Tom Holland went live with viewers and showed the new Avengers movie poster, and also stated the trailer comes out the next day.

Now this trailer is just amazing. So many moments to pick from that will give you goosebumps. But lets start with Spider-man. His new suit looks crazy. He had so many good moments in this trailer from showing his spidey-sense, to the new suit, and also even doing battle with Thanos real quick. This might for sure be Tom Holland’s big break for a lot of people who feel indifferent or weren’t really feeling Spider-man Homecoming — which was actually really good to me.  Next, we see a shadowy figure catch a spear which we later find out is Captain America at Wakanda. This moment was so intriguing because you don’t see Cap till later, but whoever is catching this spear has  to be dope.

Man!! I have been waiting for Thanos to fully get on the big screen as soon as they announced he was coming to the MCU. This a sorry not sorry moment. I am a huge Thanos fan, and I’ve been a fan since the cartoon Avengers Assemble, when in that episode you can see the Avengers face off with Thanos in space while he has the Infinity Gauntlet. He uses each stone on the Avengers, so I’m super excited and I’m rooting for him and Black panther in this film…sorry. But just seeing the arrival of Thanos in this trailer is crazy. How he came out of the portal and just started wreaking havoc on everybody. We see him punching Iron man to the ground and then a not so spoiler moment of him basically killing Vision to collect one of the stones. Thanos is just a straight up bully, and I can’t wait to see how he talks to the team.

I  think I got the most hyped seeing all the Black Panther moments in this trailer, and no not because he is  the black guy, but all of his scenes just look so sick, and amazing. I honestly expected to see that T’Challa (Black Panther) in this trailer just because, but boy was I excited from the moment he told his people to trust Captain America and get him a shield, to that side eye he gave to someone. I mean come on even Bucky lined up on the front lines with Wakanda. Now, that’s something major after seeing Civil War, and Bucky and T’Challa squashed whatever beef they had going on. In this trailer, we see that Black Panther is truly coming into his own, and he is at the forefront of being in command and being someone that everyone knows is a force to be reckoned with. This just makes fans even more excited for the solo movie that comes out in February. I love when we see all of Wakanda lined up and ready for battle, and the trailer zoomed out with everyone charging in.

Hold on to your butts!

This trailer is just insane, with all of the different team ups from Doctor Strange, Hulk, and Iron Man, then we also Black Widow and Scarlet Witch, and Vision. We also see Thor and Loki. In this film Thor seemed like the comedic relief for all the craziness that was going on. Everyone else in this trailer has kind of the “this is the end of the world” feel and “were all going to die”, while Thor is over there laughing having a good time with a mysterious eye patch on. So many people are confirmed to be in this film. It’s going to be really interesting to see how they transition each person. There was also one part in this trailer where the music kind of became so cinematic where you felt like this was truly the last stand or this was like a Star Wars turned comic book movie for a moment. The music just had you so glued into every moment in this trailer. 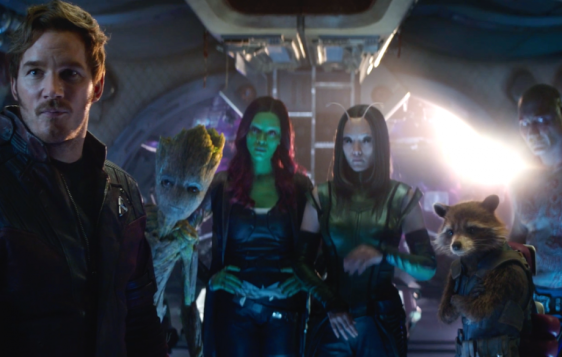 I also loved the end of the trailer where we see the Guardians of the Galaxy. It was kind of a nice surprise for everyone, because we know they are in this film, but it’s like  they rarely had any moments in the trailer. So hopefully this doesn’t mean a lot of their scenes are cut from the movie, because Guardians, in general, have been known to have some of the most beautiful scenes throughout Marvel movies. So I can’t wait to see Starlord, Rocket and Gamora all in action and I also loved seeing Mantis with the team, and how she has joined the squad.

I’m so ready for this movie, and just can’t wait to see the finished product, and to all the people who have been saying this whole trailer is better than Justice League. Please stop. Justice League was good to me and DC Comics and Warner Bros. have their own issues but this movie right here is what the focus is on. Also, side note, I have figured that if a show or movie does a Vanity Fair cover shoot, most likely there will be a trailer soon. Can’t wait to see how each character interacts with each other from the different movies, and how they will try to defeat Thanos. Infinity War is going to be crazy. Get ready!