So I just recently went to see the new movie “Venom” starring Tom hardy as Eddie Brock aka Venom. Now, before this movie came out, so many people were wondering if it was going to be R-rated? Then we found out the movie was going to be PG-13 and everyone threw a fit saying, “Oh, Venom is a violent character. This movie isn’t going to be good if it’s PG-13. I don’t want to see it anymore because I’m disappointed it’s not going to follow the comics.” But we have to look at it this way, we’ve been spoiled already with movies like “Logan” and “Deadpool 1 & 2“. Just because a movie is R-rated doesn’t necessarily mean it’s going to be good. It just means the director felt there were scenes that might be too sensitive for a regular audience (even though every kid has probably seen both Deadpool and Logan).

Just a few days ago, we got our first taste of reviews from people who had a first look at the premiere of Venom. The reviews were quite mixed but also very heartbreaking, especially for people hoping to hear good things. Some people said this movie was Catwoman bad! Now, don’t get me wrong. I love Halle Berry, but that movie either shouldn’t have been made or could’ve been made so much better. So, when I read that people were saying it was that bad, I just knew that people had to be reaching for some kind of disapproval of the movie. Some people said the movie was slow and the story was boring and there was not enough action. I mean come on guys! This a movie! There has to be some backstory, and there was action as soon as the movie started. So, fans, like myself, said this can’t be true, especially from the trailer, and the clips, and because I know how good of an actor Tom hardy is. This movie couldn’t be that bad. 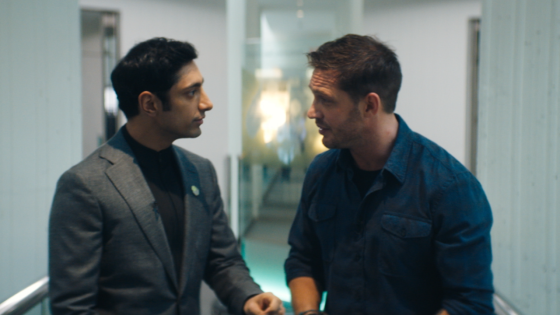 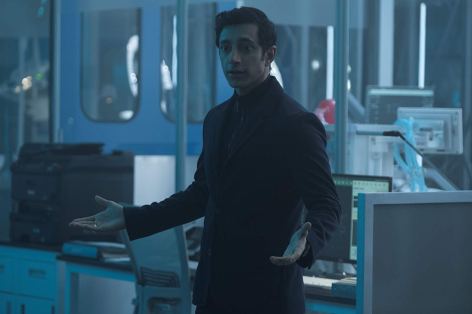 We first start the movie with Carlton Drake played by Riz Ahmed. He did a great job and played a really good villain. Drake is the Founder of the “LIFE” space program and who brings the symbiotes to earth. We actually get a glimpse of the symbiotes being brought down, and I was so happy the similarities to the Spiderman animated cartoon of how the symbiotes crash landed to earth.

Eddie Brock is a reporter and has his own show called “The Eddie Brock report”. His boss wants him do a piece on Drake, but Eddie already doesn’t like Drake and believes he is a crook and evil. Eddie’s boss says he has to do the piece and not bring up anything negative, or he’s fired.

Eddie lives with his girlfriend, also fiancée Annie, played by Michelle Williams. She works at the firm who deals with Carlton Drake’s work and is sent a classified document that Eddie sees before the interview. He uses it against Drake. In the end, it back fires against Eddie, with Annie leaving him and both of them being fired.

I really enjoyed Michelle in this movie more than I thought I would, especially towards the middle and end of the movie. Her character got really interesting. 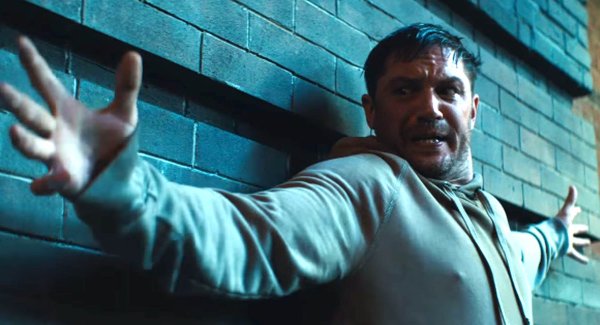 Eddie starts to go on a downward spiral, trying to find a new job and trying to pay the rent in his apartment while also trying to win Annie back.

While watching this movie I can see where some comic book fans might have been mad or irritated. Venom is originally set in New York with Spiderman, and this movie is set in California in the Bay area. I have to say I loved that we heard a little bit of hyphy music in the background. For those that don’t know, hyphy music is hip-hop sound that California created. During the movie we do hear Eddie say to Annie that he moved from New York to California to be with her. So it’s almost a hint that yes he does have a backstory in New York.

I have to honestly say I love everything about how Eddie got the Venom symbiote, and everything after. The movie got so good. That while scene with Eddie getting the tip from Dr. Skirth, played by Jenny Slate, and escaping the Life Foundation Facility was incredible. Some people said that Eddie being controlled by the symbiote reminded them of the movie Upgrade that just came out a few months ago, and I honestly can see why they said that. I think the two were very different. Both had similarities in terms of hearing a voice in their minds, but their controllers had completely different agendas.

We go from Eddie not understanding the voices that he’s hearing and thinking he’s crazy to finally embracing his circumstance. 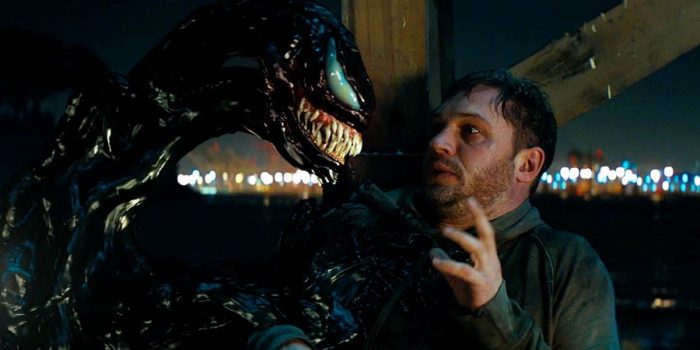 One thing I truly enjoyed was the relationship between Eddie and Venom. It was funny, yet understanding. I mean, if you had an Alien trapped inside you, that also didn’t want to live you, how would you deal with it? In the picture above, I truly loved that scene when Venom talked to Eddie after going on a super high speed chase to get rid of Drake’s men. Venom lets Eddie know the deal and that he actually likes being stuck to him and that they are very similar.

For all those people who didn’t think the movie would be violent or action-packed, I’m telling you there is enough for you to enjoy this film. From the motorcycle chase, and the apartment scene, to Venom seeing drake’s men and trying to rip them apart and Eddie being in shock that Venom can get this violent. We see a couple heads get bit off. I also enjoyed that we got to see the symbiotes weaknesses, which is fire and a certain frequency or sound that the symbiote cannot stand. 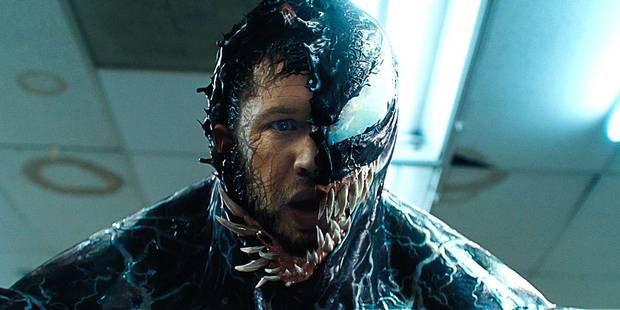 I won’t give away how it ends, but I will say what I think about it being PG-13. The PG-13 rating worked for this movie because we actually do see Venom being Venom – from wanting to hurt people and telling Eddie “let me just kill them or bite their head off so we can end this.” We also see that Ruben Fleischer wasn’t afraid to actually give us good moments were it felt like a Marvel movie. But you could also tell this wasn’t part of the MCU. In an R-rated movie, of course, we would’ve seen blood and the remains of the heads that were ripped off, but for this movie I don’t think that was necessary. In this film we saw Venom emerging and trying to escape and trying to complete a mission.

Some people might suggest or say this movie wasn’t accurate so it doesn’t really belong in the MCU, and what was the point of this film? Well, I heard someone say the other day that this movie felt dated, like because of the look and feel, it should’ve come out when the other Spiderman films came out. And I honestly have to agree. It it felt like one of the old Spiderman movies with Tobey McGuire, not the graphics, but how the story played out. This could have been used as a placeholder instead of using Topher Grace as Venom.

I think this movie was executed well in terms of what it wanted to accomplish which was bringing Venom to life and actually giving him a proper film or proper showing of his abilities. Do I wish there was more? Of course I do. Do I wish this Venom could be used for Spiderman Homecoming with Tom Holland? Yes, I definitely do wish that. I know people are saying, “Well, Venom isn’t Venom without Spiderman,” which is very true. The relationship between Venom and Spiderman co-exist, but that’s only because of Eddie’s hatred for Peter Parker and how the symbiote decides to take on the Spidey symbol. 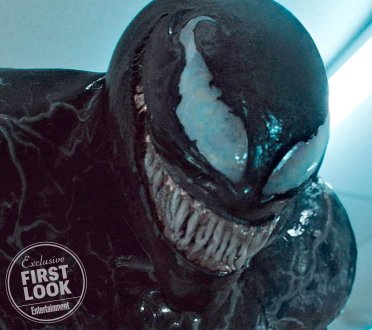 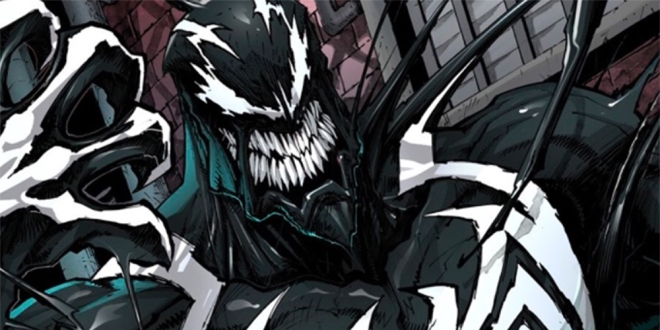 So there will be a sequel which is expected to be R-rated. That end credit scene was very telling. And yes, if you are wondering, there are end credit scenes. Stay to the very very end of the movie after all the credits for a special surprise.

I also believe we will start to see a Venom-verse, like the comic books, where we see all the different Symbiotes in action. In the next film, there’s about to be an all out war. I am on board for that.

And lastly, be your own judge. Don’t let critics or anyone be the judge for you.

Riceball Rating: 8/10… I would’ve give it a 7.5 but I honestly really enjoyed the movie.