On October 27, Rockstar Games released their highly anticipated title, Red Dead Redemption 2. With pushed back release date after release date, it finally came! It was like Christmas before Halloween. The long awaited sequel to 2010’s Red Dead Redemption (a sequel to 2004’s Red Dead Revolver) was out! For those of you that are uninitiated to this awesomeness, let me give you brief insight to the pit falls and perils of being an online outlaw.

First, I’d like to state for the record that I am perpetually the good guy in any game I play. Dungeons and Dragons, Fallout 4, Skyrim, it doesn’t matter. I’m that guy that pisses off the group’s resident ‘anti-hero’ by demanding that they return the townspeople’s money because it’s the right thing to do! (And you know it is! You’re just selfish, Michael!) But this is a bad thing. The game (in story mode) ends a little earlier than it would if you had lower honor.

Many gamers have abandoned their story mode completely for online when the beta released, which was to be expected. As soon as the online beta was released, the socials were instantly flooded with various posts of other gamers attacking them for no reason. For example, I was in the middle of the prairie picking Yarrow when a posse of five rode up on me and began circling me. Quickly realizing the situation I was in, I futilely pulled my revolver to fend the oncoming attack, when suddenly I was lassoed!! And before I could start screaming obscenities that would make a career sailor blush, off I was being dragged from behind this jerkbag’s horse. I thought that I’d be dead eventually and just respawn, no big deal. Then the posse stopped, and began to dismount their horses. As one of the posse began to hogtie me; another started to lead her horse towards my prone character, and as she lead the horse and passed me, I suddenly realized what game these sickos were playing at! If you haven’t connected the dots yet, they tied me up and had a horse poop on my head. Needless to say, I stopped playing the game for the rest of that night.

Nevertheless, I wasn’t deterred to stop playing all together. I spent the day at work on my personal Facebook account perusing the Red Dead Redemption 2 pages and came across a post from a person claiming subtlety that if any “punk ass bitches” showed their faces in this person’s vicinity of Strawberry that they’d shoot the ugly off their face. So, naturally, as soon as I got home, I quickly finished my “Dad” chores so I could get on and find out. I left my camp and started making my way to my destiny when I was shot down by the jerk going in the other direction. After respawning, I started out again, when I was again killed by the same guy. So this kept happening and happening to the point that I was too frustrated to keep playing. Some freakin’ people man…

Another big problem online players face is being attacked and robbed while waiting in line to sell your wares to the Butcher. For example, I was approaching the butcher to sell my pelts when I saw the guy already approaching the butcher when another PC ran up to him and killed him for his pelts and sold them for himself! Without sounding stupid, it really is like the ‘Wild, Wild West’ online, and if you were me, I’d be very weary of basically everyone that you don’t know personally.

I read a post on Facebook from a girl stating that she was playing online and for some reason left her console on and it went idle; she returned an hour and a half later to find her character tied upon a table at some random dudes camp while he was just resting by the fire eating ─ just eating baked beans out of a can… ya know? Normal psycho cowboy stuffs! Can you imagine walking away from your game to return to find yourself being virtually cannibalized!?!? 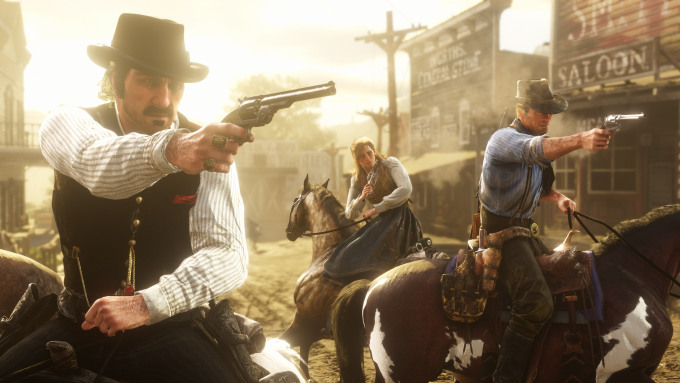 I guess I bumped into the white sheep of the server

Not every player is out to ruin someone’s good time to please themselves. I saw a group of four players cross a wide river near the mouth of a waterfall. None of these players were posse’d up together. They were relative strangers. The first player barely got across to the other side of the raging rapids as the next player jumped from the far bank into the middle of the roaring water. The player jumped from way too high up and his horse did do a very graceful somewhat slow motion swan dive into the shallow side of the river, instantly snapping its neck and dying. The player immediately started towards the open mouth of the waiting waterfall when the first player to cross equipped his lasso and tried to lasso the cowboy floating down river. After a few failed attempts he was successful in his rescue attempt right as the cowboy went over the edge of the waterfall, and hoisted the other player up from his certain doom.

Some players have even adopted the whistle, primarily used to summon your mount, as a sign of being in friendly company. I was on the banks of Flat Iron Lake fishing when I was approached by a lone rider. Cautiously, I stopped fishing and turned towards the oncoming player. He slowly trotted up and dismounted his horse and began whistling. At first I was a little perplexed at this and after a few seconds of it, I waved to him. He kept whistling ─ I didn’t know what he was playing at. Was he signaling to some unknown compatriots? Was he just trying to annoy me? After a few minutes I whistled back and he suddenly stopped whistling and waved back. Hepulled out his fishing pole and for two hours we fished together. About halfway through this time we were approached by another would be angler and was happy to hear his tell-tale whistle announcing his benevolent intentions he joined the fray and we all got our fill of fish surprisingly in peace!

I also came across a giant melee battle involving what looked like everyone in the entire server. Seriously, every player was shirtless as they surrounded the two in the middle of their fight. They had made their own Red Dead Redemption ‘Fight Club’. I didn’t join, so I have no qualms about talking about it. While that doesn’t seem too far fetched, if on my online travels, I come across a Red Dead Redemption ‘Project Mayhem’, I will however keep that information to myself…

Everything is super expensive- for now at least

The online gameplay is in its beta phase, meaning that they’re working on getting all the kinks and bugs out. So, at this point everything is still up in the air about the post-beta online gameplay, but Rockstar announced that they don’t plan on restarting everyone’s levels and money and equipment they currently have. And that must have been bothering a good amount of people because along with that, Rockstar also went on to say that anyone that played the beta before December 6th at midnight PST, you’ll be given 15 gold bars and 250 dollars in cold hard cash sometime before December 15th. Also an important change coming is a price cut of up to 40%! So that $1000 Mauser pistol will now be around $600 bucks!! That’s a Glob send to us folk that have been grinding their nights away for basically chicken feed!!

Now don’t get me wrong, I’m super happy about the change in prices, and that Rockstar claims that they don’t plan on resetting everyone’s levels as it were; but what makes me kinda salty is the freakin’ fact I, just like so many of you, had to grind our asses off just to get enough money to buy the cattleman’s revolver for $377.00! Of course, while grinding for all that skill, we also had to fight off every dick on the server! Maybe when we get those gold bars and moolah it will make us appreciate it all the more because we all had to hunt every damn animal we came across for four consecutive nights just to end up with about tree-fidy!

So, the next time you’re out in the plains and you see that player approaching or your walking the mean streets of Valentine, don’t be so quick to assume he’s going to attack you for little to no reason. He may whistle as a sign of peace. Or he may just be whistling to lull you into a false sense of security so he CAN kill you. And I know you can’t tell while reading this, but I’ve been shaking my Glob damn head this entire time retelling you guys all these horror stories. But I attest to you all that when seeing and hearing other people’s stories of atrocities, I laugh my ass off ─ mine aren’t half as bad.