Whats up all my Riceballers, it’s Stewyp here and I bring to you Gotham Season 2 Rise of the Villains. Now I want to talk to you guys about last weeks episode which was amazing and honestly one of the best well put together episodes from Gotham in my opinion. For all of those who don’t know Gotham is a spin off show of when Bruce Wayne was a young kid before he became batman, now Last season had it’s quirks and many people did not like the first season because they felt it introduced too many villains even though batman(bruce wayne) is only about 13 in this show. The reason why I still am viewing this show was the season finale of last season. The season finale showed the rise and fall of the mob with Falcone and Maroni, and anyone who knows Batman knows the mob is very prevalent in this saga and comic book series, but the season finale also showed Penguins transition and how he became a villain and a top crime boss, and might I add he is one of my favorite characters and one of the best. 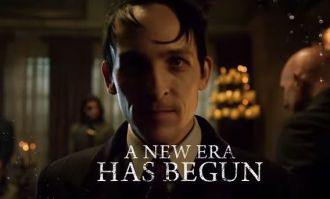 Fast forward to Season 2 now this season is called Rise of the Villains, we see in the first episode Jim Gordon has been demoted from detective to street patrol and cannot hang with the lifestyle of a patrol officer. We also see a strange man kneeling down drinking a strange purple bluish drink which we think will make him invincible, but only to be caught by Jim Gordon. We also get a glimpse of Edward Nygma (Riddler) and his transition from the last season, how he is much more unstable after killing a police officer who was abusing his long term office crush Miss Kringle. Edward is having illusions and cannot withstand the crime he committed, but you can also see that he kind of enjoys this unstable side of himself. We later meet up with Jerome, and Barbara and also other various psychopaths and villains inside of Arkham Asylum. When the estranged villain who was captured in the beginning of this episode by Gordon arrives and falls to the ground burping out some strange purple substance knocking out a particular group of villains. They awaken and are all chained up and introduced to what seems the new mob boss or villain of this season he goes by the name of Theo Galavan and offers all of the villains freedom, in exchange they work for him and terrorize the city of Gotham.

Now onto Last weeks episode which was amazing and so well put together, this episode starts off with the newly acquainted villains throwing random people in straight jackets and blind folds off the roof of a journalistic building, spelling out the name “Maniaxx” showing the city of Gotham there is a new face of fear that has hit the city.  This brings out the craziness and victorious grin of enjoyment from Jerome aka Joker. Theo Galavan then suggest that if the maniaxx are going to become mainstream threats they need to have a tv presence which starts off a heated Russian Roulette montage with Jerome vs another villain not yet to be named naming Jerome the leader of the group.

In this episode Jim Gordon is happy to have his detective job back after last episode doing some of the penguins dirty work, but with his job back he still misses his old partner Harvey Bullock who has turned his life around and quit the detective business. This also gives rise to the new chief of Police she is an amazing cop and perfect for the job until the Maniaxx strike once again with almost burning a school bus load of cheerleaders before Detective Gordon and the rest of the GCPD catch up to them before they could blow the buss to pieces. This leaves the police wondering what is the motive of these animated and wacked out villains.

The Climax of this episode was after Gordon returns to his desk to only get a phone call from his ex girlfriend Barbara Kean, who sets Jim up by walking him into an alley only to be jumped and beaten on leaving the police station open season Barbara tells Jim he always tried to save her but she never needed saving ,she just needed to be free to be able to be herself. This leaves the GCPD helpless while the maniaxx infiltrate the facility acting as cops shooting every cop in site while Jerome holds the police chief hostage. Now rewind to last season we met Jerome when Jim Gordon was investigating a case of a circus murder where Jerome’s mother was killed only to find he murdered his own mother because of the rumors he heard of his mother. Jerome is now the leader of this new group terrorizing the city when he video tapes the actions going down in the police department he explains how Gotham has yet to see the extent of terrorism that will happen and that this is only the beginning because they are the stronger force. He gives an amazing performance in this episode showing he is truly growing up to be the joker.

Tonight is the second installment of basically the rise of Jerome showing his true transformation, but I would like to take the time out to say a lot of people do not like  how this show is showing so many villains so soon. I for am not mad at this being a big batman fan, but I think most feel this is the true origin of batman and Joker, but this is merely a different perspective of how things might have started. I am impressed so far with how this season is going. Hopefully more people will start tuning in with these couple of episodes. I will continue this post after tonight’s episode..